Main Menu
You are here: Boston - Travel Guide | What to know | When Should You Visit Boston?

The Best Time to Visit Boston

Categories: Boston - Travel Guide - What to know
Boston should definitely be high on your list of cities to visit when vacationing in the United States. Located in the state of Massachusetts, on northeastern seaboard (Atlantic Ocean) of the US. It is easy to visit from New York even as a day trip, but if you want to explore its surroundings and the famous New England region, your stay should be at least 3-6 days long. Knowing the climate and temperatures can help you choose the most suitable period to visit according to the type of vacation you are planning.

Boston's continental climate brings very cold, snowy winters and hot summers with frequent thunderstorms, moreover it is affected by cold currents coming from Canada and from warm ones coming from the Gulf of Mexico creating instability. Average daily temperatures vary from 32F/0C in January to 78F/25C in July. Let's see the average highs and lows during the year:

Precipitation is abundant and distributed over the 4 seasons. In your suitcase, never forget packing a raincoat, comfortable shoes and an umbrella! In winter, you will probably encounter snowstorms while in the spring and summer thunderstorms are quite frequent. Here is a table that helps you identify the rainiest months.

If you are planning your trip in winter, from December to mid-March, be prepared for the cold, the average temperature hovering just below freezing can drop down to 5F/-15C or even below. You will have to battle freezing winds and frequent snowfalls.
Dress appropriately if you want to visit the city on foot (which remains the best way to explore the historic center) and make sure to go inside to visit museums (or indoor attractions) to find cover from the cold. 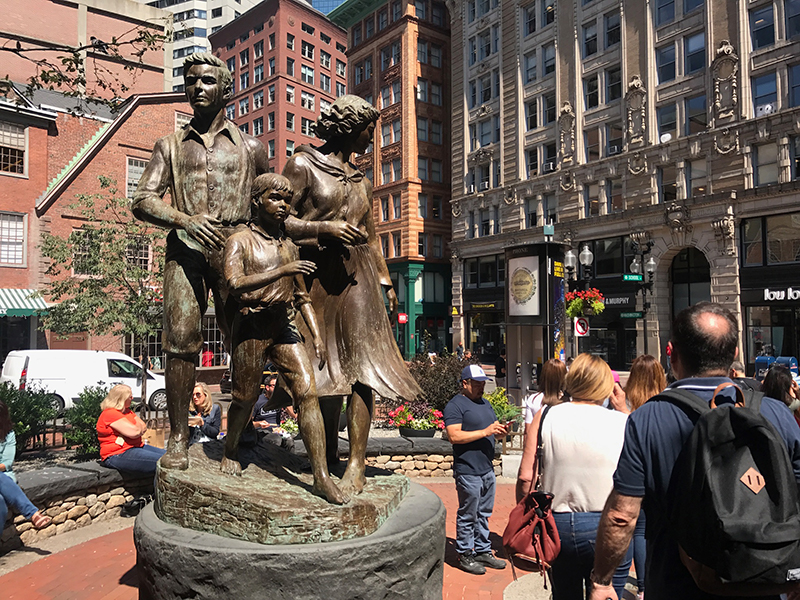 Spring (from mid-March to mid-June) continues with an unstable climate, alternating cold days with the first few days offering mild temperatures. There may still be snow between the end of March and the beginning of April, but starting in mid/late April, the temperatures will start rising, May is certainly a good month to visit Boston, the daily temperatures can even exceed 77F/25C. However, this is also the time in which the first afternoon thunderstorms can occur and a light fog can form the bay. Walking around Boston, and its tree-lined streets, is really pleasant and there are many places to visit including the famous Freedom Trail. Make sure to add a visit to the harbor and why not, a whale-watching cruise to your itinerary!

Although summer, from mid-June to August, brings average high temperatures and humidity, it is still a good season to visit the northeastern region of the United States and Boston. The maximum daily temperatures range from 73/75F - 23/25C at the beginning of summer up to 80/90F - 28/30C in August but it can also reach over 95F/35C. But be prepared for thunderstorms, frequent and intense, they do come suddenly, however, fortunately, pass just as quickly. Bay cruises and the popular whale watching are some of the activities that you shouldn't miss during this season.

Fall is the foliage season and between Boston and its surroundings, you will be able to enjoy an incredible scenery. The fall season, from September to November, is the mildest and least unstable of the year, especially in the first half from mid-September. Temperatures become mild, afternoon thunderstorms decrease and you can .truly enjoy your time outside. It is still a good time for some whale watching, which runs from April to the end of October, so take advantage of it! The first snowfalls usually start in late October/early November.

When to Visit Boston

Even for Boston, as for much of the North-east, the best seasons to plan a vacation are spring and fall, avoid the winter (especially mid-January to end of February) for the frigid cold, and avoid the summer heat in August. When planning your vacation, take into consideration the periods from mid-May to mid-June and from early September to mid-October especially if you love the Foliage.

Don't forget to include this splendid city in your North-American Itinerary whichever season you may select and enjoy your time in Boston a city full of history that you will love.

Traveling in the US? See our exclusive tours & offers

Whale Watching
From 68.00 USD
We are your your local Tour Agency in New York City